A former student, wrote to Richard Feynman, asking Mr. Mano what he was now doing. The response: "Studying the Coherence theory with some applications to the propagation of electromagnetic waves through turbulent atmosphere... a humble and down-to-earth type of problem". 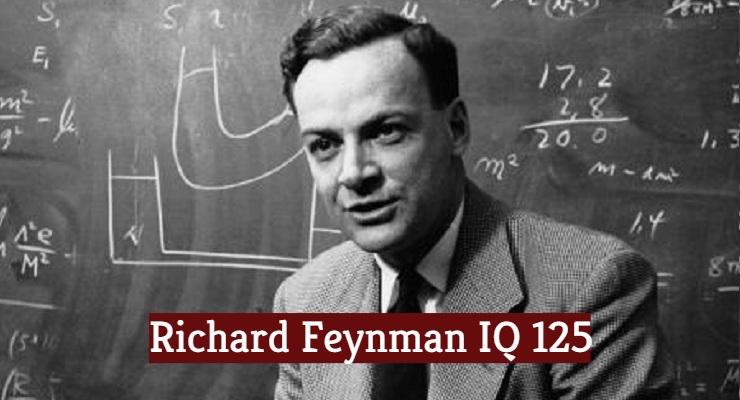 Richard Feynman IQ 125.
You can test your IQ by Click here

I. Richard Feynman IQ and Nobel Prize in Physics 1965

That kind of response you can often see from some fictional genius scientist type character in some DC and Marvel comics was said by Feynman as a response to his student…. or may be one of his infamous genius joke.

Either way, Feynman was universally regarded as one of the fastest thinking and most creative theorists in his generation. Yet it has been reported-including by Feynman himself-that he only obtained a score of 125 on a school IQ test. Many suspect that this test emphasized verbal, as opposed to mathematical, ability. Feynman received the highest score in the country by a large margin on the notoriously difficult Putnam mathematics competition exam, although he joined the MIT team on short notice and did not prepare for the test.

He also reportedly had the highest scores on record on the math/physics graduate admission exams at Princeton. It seems quite possible  that Feynman’s cognitive abilities might have been a bit lopsided-his vocabulary and verbal ability were well above average, but perhaps not as great as his mathematical abilities. I recall looking at excerpts from a notebook Feynman kept while an undergraduate. While the notes covered very advanced topics for an undergraduate-including general relativity and the Dirac equation-it also contained a number of misspellings and grammatical errors. I doubt Feynman cared very much about such things.

Richard Feynman was a scientist, professor, musician and raconteur. Bill Gates adds to that description Feynman: “In 1965, Feynman shared a Nobel Prize for work on particle physics. Feynman wasn’t famous just for being a great teacher and a world-class scientist; he was also quite a character. He translated Mayan hieroglyphics. He loved to play the bongos. While helping develop the atomic bomb at Los Alamos, he entertained himself by figuring out how to break into the safes that contained top-secret research.

”The Cambridge History of Science includes this text: “No doubt some of his peers dismissed Feynman’s interest in literature, art, and music as just as embarrassingly irrelevant to physics as his frequenting of strip clubs.” Rochus Vogt, a Caltech physics professor, former provost, and former division chair in Physics, Mathematics, and Astronomy adds: “He was not only a top-notch physicist, but he was an artist, a Renaissance type of person. He had certain insights and perceptions in physics that I have no word to describe other than "artistic".

One thing people have always wondered about is the fact that Richard Feynman had substantive accomplishments , Leonardo Davinci type of know it all expert with a sense of humor only seen in the very smart one which marked him as definitively brilliant by the time he was talking about his 125 I.Q. score (which is smart, but not exceedingly smart).

Intelligence scores are supposed to be predictors of accomplishments, but Feynman already had those accomplishments. Bright people take many psychometric tests, so there will be a range of score about a mean.  But it may be that Feynman gloried in reporting his lowest scores because that made his accomplishments even more impressive. Unlike most he had nothing to prove to anyone.