Sheldon Cooper IQ score is 187, which is considered as a genius person and in top 0.1% of the population in the world. 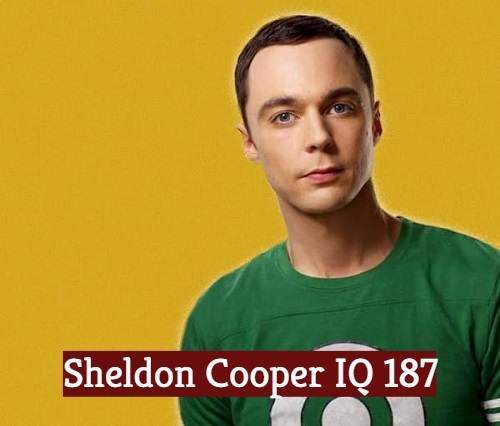 Sheldon Cooper IQ 187. You can test your IQ by Click here

Sheldon Lee Cooper, Ph.D., Sc.D., is a fictional character in the CBS television series The Big Bang Theory and Young Sheldon, portrayed by actor Jim Parsons in The Big Bang Theory and Iain Armitage in Young Sheldon. For his portrayal, Parsons has won four Primetime Emmy Awards, a Golden Globe Award, a TCA Award, and two Critics' Choice Television Awards. The character's childhood is the focus of Young Sheldon; the series is set in 1989 when 9-year-old prodigy Sheldon has skipped ahead four grades, to start high school alongside his older brother. he population in the world.

Aside from his characteristic idiosyncrasies, Obsessive–compulsive disorder, obsessions, and extreme narcissism, Sheldon does not understand why humans are illogical and tries to be logical himself.(Though he is actually more illogical than most people in so many ways Ex: Fear of change, fear of birds, expecting others to change for him, throwing childish tantrums, being immature, etc.) Sheldon Cooper IQ is 187, although he claims his IQ cannot be accurately measured by normal tests. Sheldon has an overly extensive general knowledge, such as shown by his comments regarding various details of anecdotal knowledge (for instance, about the introduction of the fork into Thailand). It was also revealed in "The Sales Call Sublimation" that Sheldon, possibly, has synesthesia. He told Raj that he automatically sees prime numbers as red and that twin primes appear pink and smell like gasoline. These are characteristics of people with synesthesia.

Sheldon Cooper IQ of 187 points places him in a very small fraction of a percent of the most intelligent people in the world. An IQ score is a normalized, scaled representation of the percentage of people that are at least as "intelligent" (as measured by the test) as the scored person. Current IQ tests are scaled to 15 points per one standard deviation (all IQ tests have 100 assigned to the population mean score), older tests (e.g. the popular Stanford-Binet Test) have 16 points per st. deviation. Assuming Sheldon's score is on a modern test, an IQ of 187 means a person with such an intelligence level occurs approximately once per 300 million individuals, i.e. Sheldon is in the top 25 smartest individuals on the planet (using 7.25 billion as the human population of the Earth). If his score were on a SD-16 test instead, he'd have a 1 in 37 million intelligence, and there would therefore be some 200 individuals as smart as or smarter than him in the world.

However, it is true that all IQ tests are highly imprecise for extreme values such as Sheldon's (owing to the very small number of people who can achieve such a result, rather than because of bad test design).