Meaning of your IQ test scores

Different IQ test scores show different people's abilities. If your result is over 130, you are a genius.

After taking an IQ test, do you understand what your IQ score meaning? What’s the average IQ? Do you have a gifted IQ score? The table below gives a clear view of the IQ test scores level derived from Resing and Blok (2002). The table is divided into many categories included your IQ test scores, the percentage of the population with the same IQ scores and theirs meaning.

People have different cognitive strengths and weaknesses such as visual, music, math or language. Among of them, there is a common component called “general intelligence” or “G”. “G” is measured by many kinds of psychometric assessments including university entrance exams, IQ tests and job aptitude tests.

Among these tests, IQ tests are the most accurate and reliable type of assessment that psychologists have devised. They are assumed to be a good measure of a general intelligence or “G”.

IQ tests are widely used in many situations of educational, professional and for leisure. For example, universities use the IQ tests to select students, companies use them to recruit applicants and high IQ societies such as Mensa select members based on IQ test scores.

2. What does my IQ test scores mean?

Many people wonder if their IQ test scores mean after taking the IQ test. However, the results are not always easy to understand. Some professional tests do not tell you exactly your score, but they mention an IQ range instead. This range demonstrates that your score can be vary in a specific IQ scale because of some factors that affect you when you take the test.

100 is always the average IQ score and your personal IQ test score can be compared to other people who take the test in the same condition with you. There is no concept of a "normal IQ range", although you can distinguish groups like average intelligence. Most IQ classifications usually take care in naming group separately. So, "very gifted" can be a phrase adapted to a genius IQ level. 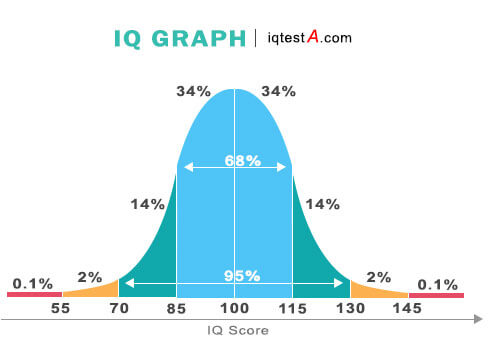 Also, 95% of the norm group has an IQ score within two standard deviations of the average. So, 95% of the norm group has a score between 70 (100 – 30) and 130 (100 + 30). This means scores of over 130 only occur in 2,5% of cases. For example, the Netherlands has 16 million inhabitants. Based on chance, only 25 of these inhabitants would have an IQ score of 170. There would only be one person with an IQ score of 180. Only 4 out of 1000 would score at least 140 on an IQ test. A lot of online tests score you 130 or higher relatively easy. These tests often have a different goal, like collecting information for marketing purposes.